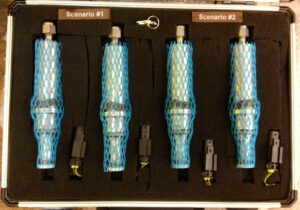 21/09/2016 is a very important MILESTONE for GDTech Powertrain team, with the delivery of the first “tailor-made prototypes of DI-CNG injectors” for HEAVY-DUTY Long-haul LNG mono-fuel engines.

The design & test phases were conducted by Gilles Herbillon acting as Chief Engineer on this project for GDTech.

The all development was completed by GDTech Powertrain team, and the manufacturing requested more than 20 different suppliers (for machining, welding, winding, material supply, internal components supply, and various treatments).

This injector will equip the future Cursor 13 DI-CNG from IVECO line-up, and is developped in the framework of HDGas European projet, where GDTech is official injector supplier of Fiat

Running a HEAVY-DUTY engine in DI-CNG is just a WORLD FIRST.

Since Nov-2008, GDTech leads R&D projects in the field of DI-CNG passenger-cars engines (with the support of Wallonia Research Directorates).

Several concepts of injectors were already developed & test-proved on passenger-cars engines. A demo-car Peugeot 508 equipped with a DI-CNG convered engine is being tested on the rollers to meet EURO 6 emissions targets.

One concept of injector was adapted here to meet the specification of a heavy-duty 13L engine.

Intermediate pressure levels can also be reached for the engine intermediate load points.

These injectors can be controlled with a dedicated driver from 18V to 24V (with or without peak voltage).

A patent has been filed in the meantime to protect several points of the injector design.

As a next step, these injectors will now be tested on single-cylinder test campaings.

Looking forward to confirming the great potential of the concept in terms of fuel economy, CO2 saving & others emissions reduction.

Your browser is out of date. It has security vulnerabilities and may not display all features on this site and other sites.

X
We use cookies to ensure that we give you the best experience on our website. If you continue to use this site we will assume that you are happy with it. OkPrivacy policy